Consumer Health Advocate
At all stages of a doctor's career, professional life can become more rewarding when we improve problems in the healthcare system. While working as a full-time community-based pediatrician, I was fortunate to identify four areas where I was able to make a difference.
Formalized Telephone Communications Between Doctors and Patients.
We recognize telephone triage and communication as an essential element in patient care. But when I trained to be a physician, we were expected to learn these skills as on the job training. Early in my career, I developed one of the first telephone medicine manuals for pediatric practice. I also lectured on the topic and developed complimentary materials for use by parents.
Disclosure of Additives in Pharmaceuticals.
I noted that the additives used in medicines were not being disclosed to the public. These included the coatings, fillers, preservatives, flavorings, and colorings. Disclosure was not required unless they were shown to be harmful - but - without disclosure, they could not be shown to be harmful. I published a list obtained through Freedom of Information Act, sued the FDA, consulted on legislation, and testified at congressional hearings. Undisclosed ingredients included shellac, carbon tetrachloride, carcinogens, and allergens, many of which were subsequently removed once labelling was required.
Requiring "Use-By" Dates on Labels of Prescribed Medicines.
When a patient asked if her child's asthma inhaler was still potent after 12-months, my "yes" answer was just an educated guess because only.20 states required expiration dating of prescribed medicine. FDA regulations did require expiration dating on nonprescription drugs and the manufacturer's stock bottles of prescription medicine, but not on the labels of prescription drugs dispensed to consumers. I publicized the problems associated with using undated prescription drugs, and most pharmacies now include it on the label.
Improving Healthcare for Veterans in a Community Setting.
The public was focused on lapses in care vets receive at the Veterans Administration. But, the 80 percent of veterans who have health insurance and receive healthcare at community facilities were mostly unnoticed. Most physicians were not identifying veterans in their patient populations, and did not know how to take a basic military health history. I wrote published papers on the subject, publicized the problem in the media and at medical schools, and worked with the VA, AAMC, and ANA on the problem It is still a work in progress. 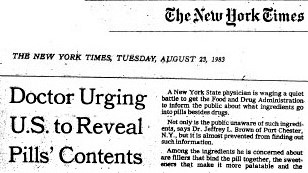